Posted on January 25, 2016 Posted By: AtlasCategories: Dinner of Abrahamic Traditions 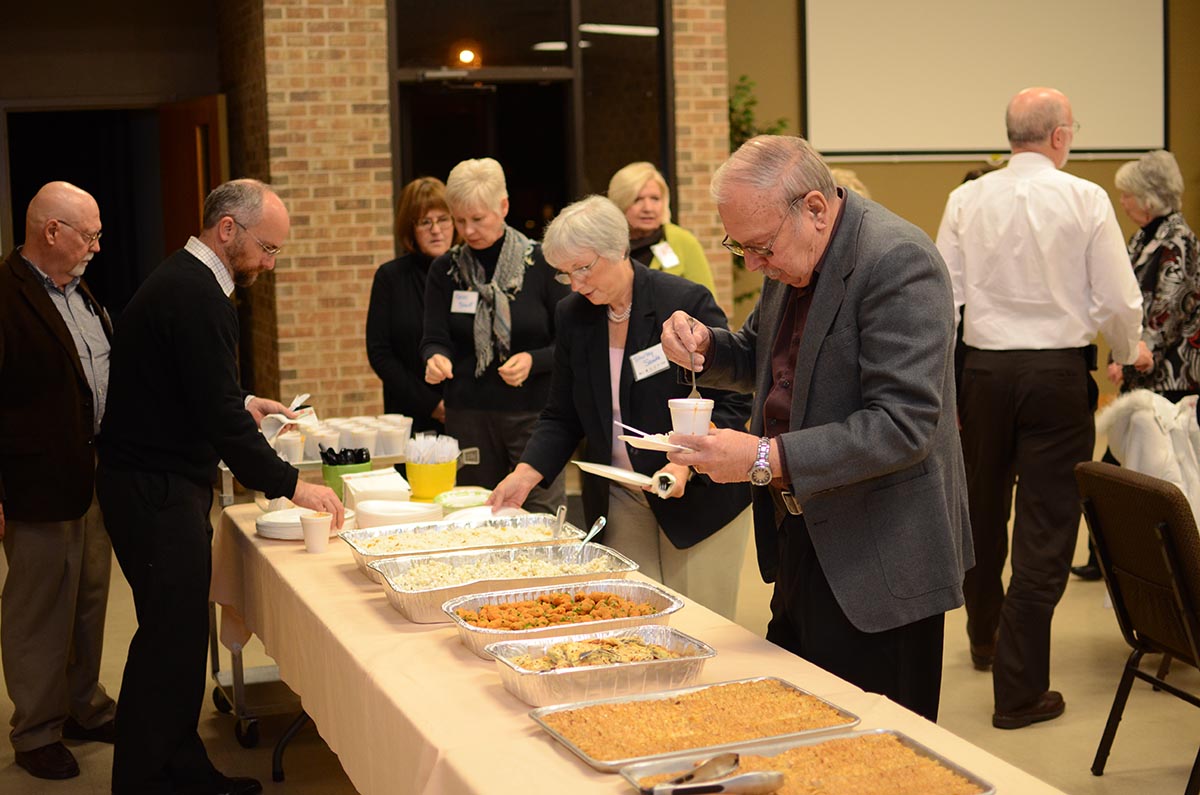 BT MARK H. HUNTER I SPECIAL TO THE ADVOCATE

Learning more about the faiths of others can lead to respect and dignity, breaking down the walls that divide and pit people against one another.

Often, those of various religions find they have much in common.

That was the goal of the ninth annual “Dinner of Abrahamic Traditions” co-hosted by the Atlas Foundation and the Interfaith Federation of Greater Baton Rouge.

More than 50 area Methodists, Lutherans, Catholics, Unitarians, Presbyterians and Episcopalians joined Muslims and Jews at a local synagogue to celebrate what they have in common after a long day of Martin Luther King Jr. Day activities on Monday.

The theme of the dinner, held at Beth Shalom Synagogue, was “Perspectives of Abrahamic Traditions: Inclusivity — How We Treat Others.”

The Rev. Robin McCullough-Bade, executive director of the Interfaith Federation and a Lutheran pastor, said the work the group does is “really radical.”

“Dialogue is so critical that we sit down and get to know each other,” McCullough-Bade said. “Dr. King spent a lot of time finding this common ground. He was able to talk to Gandhi … and walk the streets with a Jewish rabbi with a white priest. It didn’t lessen who he was in his faith, yet he provided this vision for all of us — living out his faith.

“Many just don’t get it. Their hatred, the walls they create, the fear takes over, and at some point, it has to be our faith pushing back fear, our faith empowering us to get to know one another.”

The dinner, five courses of vegetarian Turkish dishes, was good, but many of the attendees said the fellowship was even better.

“The tradition of hospitality goes all the way back to Prophet Abraham, who was famous for hosting everybody. His door was always open to everybody, so we try to follow that tradition, to share a meal with people of different faiths and backgrounds,” said Emrah Aktepe, executive director of the Atlas Foundation, a local Turkish group dedicated to promoting dialogue and cooperation among people of different faiths and cultures.

“The point is to bring clergy of the three Abrahamic faiths together, to extend our friendship and find out about our similarities while respecting our differences,” Aktepe said.

The Atlas Foundation was started in 1999, he said, adding that in most counties there are similar interfaith groups, called the Hizmet Movement, based on the Sufi-inspired, Sunni Muslim philosophy of Turkish scholar Fethullah Gülen.

“Be so tolerant that your bosom becomes wide like the ocean,” Aktepe quoted Gülen. “Become inspired with faith and love of human beings. Let there be no troubled souls with whom you do not apprehend and about whom you remain unconcerned.”

“I’m here to learn more about everybody and their religions,” Armstrong said. “My mother was Jewish, my father was Lutheran and I was raised Catholic. How that happened I have no idea,” he added with a laugh. “I think this is a wonderful idea.”

After the meal, Glickman spoke first: “Jews know all too well what it is like to be excluded, being ‘the other,’ the outsider, the ‘non-us’ that has defined the historical Jewish experience.”

Of the 613 Jewish commandments, he said, several are concerned with “how we treat the stranger, as one of us … a ‘resident-alien,’ somebody who is part of us but not a part of us. We are to be very careful that we love them as we love ourselves.”

While researching his first book, “Sacred Treasure: The Cairo Genizah,” Glickman discovered that the “genizah,” a depository of manuscripts found in an ancient synagogue, revealed how Medieval Egyptian Jews and Muslims, “believe it or not,” he said, got along despite their religious differences.

“Jews spoke Arabic as their first language and were often close friends with their Muslim neighbors,” Glickman said, “and every once in a while, they got married. It was scandalous, but it happened.

“This inclusivity thing, my friends, it’s not rocket science. I know that you’ll join me in my prayer that one day, God willing, someday soon, the entire world will be imbued with the kind of respect and dignity that people can afford to one another like they did so many years ago.”

The Rev. Jane Riecke, senior pastor of University United Methodist Church, told how she was the only child of parents who loved education and history and often traveled.

“As a white Christian, I had predominance in the culture and many, many benefits to that,” she said.

Her passion for traveling and learning has taken her around the world, she said, and those experiences gave her a greater sense of inclusivity.

“How can you travel and not want to know who your neighbor is that you are sitting next to in a café or an airplane?” she said. “It makes you want to know ‘the other.’ ”

But, Riecke confessed, she had never participated in a Martin Luther King Jr. march until that day.

“I’m ashamed that this was the first time,” she said. “It made me realize how much I have lived in that privileged place, and, though I loved my neighbor and wanted the best for them, I have done little to stand up verbally for them, to make a way for them, to reach out my hand to them. I believe that more Christians need to stand up and do the same.”

The Rev. John Blewitt, a Presbyterian minister, said that as a Christian, he is “deeply grateful for Emrah’s work. I’ve appreciated how Atlas has made consistent efforts to reach out to invite Christians and Jews to become friends and appreciate each other’s cultures and faith traditions. We’re all brothers and sisters.”

Edgar Cage, a leader in the Together Baton Rouge movement and an Episcopalian, said, “I think it was very good, very important and very fitting, because as a people, we have to set aside our differences and come together and work for the common good. We have to bring people who are not like us into our horizons so we can learn from each other.”

“I think often the diversity of the region is understated and not fully recognized,” Crump said. “In the great spirit of interfaith work, this is a microcosm of this region. We’re not homogeneous, and really, we never really were.”